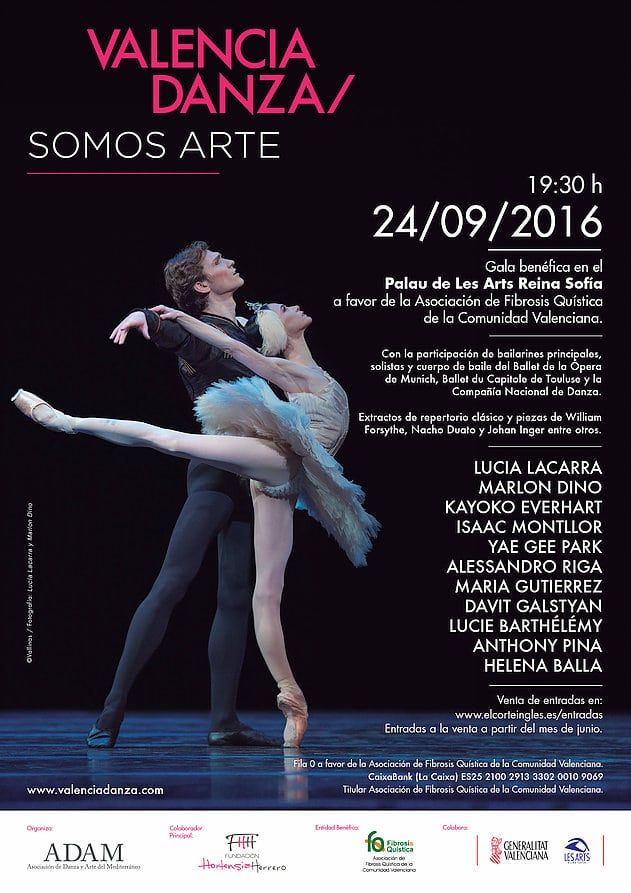 Asociación de Danza y Arte del Mediterráneo (ADAM), in collaboration with the Hortensia Herrero Foundation (HHF), are already preparing the celebration of the third edition of the “VALENCIA DANZA SOMOS ARTE” GALA, which will take place on Saturday, 24 September, at 19:30, at the Palau de les Arts Reina Sofía of Valencia. As on previous occasions, it will be a charity gala, and, this year, the takings from the ticket sales will go to the Asociación de Fibrosis Quística de la Comunitat Valenciana. A row zero has been also enabled with an account number, with which those who are unable to attend can participate.

Under the artistic direction of Gema Casino and with José Carlos Blanco in the artistic coordination, the show consists of eight pieces of predominantly classical and neoclassical style, and will last approximately one hour and forty-five minutes.

Considered one of the most awarded and acclaimed Spanish dancers of all time, Lucía Lacarra (Benois de la Danse Award, National Dance Award, Dancer of the Decade and first Spaniard to be invited to participate in the traditional New Year’s Concert of Vienna) leads the gala, in which she will perform the piece Three Preludes, with choreography by Ben Stevenson, and the pas de deux of the II Act of Swan Lake, with her husband, Marlon Dino, as a partner. Currently, both are freelance Principal International Dancers, after having put an end to their relationship with the Ballet of the Munich Opera, after fourteen years in their ranks. For their part, the Principal Ballet Dancers of the Capitole de Toulouse, María Gutiérrez and Davit Galstyan, will perform a pas de deux extracted from the classic Paquita. Unfortunately, Elisa Badenes, Principal Dancer of the Stuttgart Ballet, has declined her invitation at the last minute for reasons beyond her control. The Valencian artist was going to collaborate with the CND in Raymonda divertimento, but, due to commitments of the Stuttgart Ballet, she must be in a gala in Japan on behalf of her company.

The presence of leading figures, principal dancers, soloists and corps de ballet of the Compañía Nacional de Danza (CND) will allow to make a tour through the different styles that are present in the company, currently conducted by José Carlos Martínez. The classic repertoire will be present in the pieces Il Corsaro, performed by Yae Gee Park and Alessandro Riga, and Raymonda divertimento, with choreography by Martínez and performed by Lucie Barthélémy, Anthony Pina and the corps de ballet of the CND. The neoclassical repertoire will be delivered by The vertiginous thrill of accuracy, created by William Forsythe —one of the most outstanding contemporary choreographers—, whose interpretation is borne by Helena Balla, Kayoko Everhart, Yae Gee Park, Anthony Pina and Alessandro Riga. Recently awarded with the Benois de la Danse Award for the Best Choreographer, Johan Inger presents an excerpt of Carmen —that will be performed by Kayoko Everhart and Isaac Montllor—, commissioned by the CND and one of the two pieces for which he received this award at the prestigious Bolshoi Theatre of Moscow.

In addition, we will be able to enjoy a piece by the Valencian artist Nacho Duato, director of the CND from 1990 to 2010. On this occasion, Kayoko Everhart and Isaac Montllor will perform the duo Cor perdut, with music by Maria del Mar Bonet.

This third “VALENCIA DANZA SOMOS ARTE” GALA would not be possible without the collaboration of the Hortensia Herrero Foundation, Generalitat Valenciana and the Palau de les Arts Reina Sofia, and we take the chance to thank all of them for their contribution.

Tickets for the “Valencia Danza Somos Arte” Gala are for sale on the El Corte Inglés website (www.elcorteingles.es) with prices ranging from €8.25 to €30.40.