The frescoes of San Nicolás Church shine in all their glory 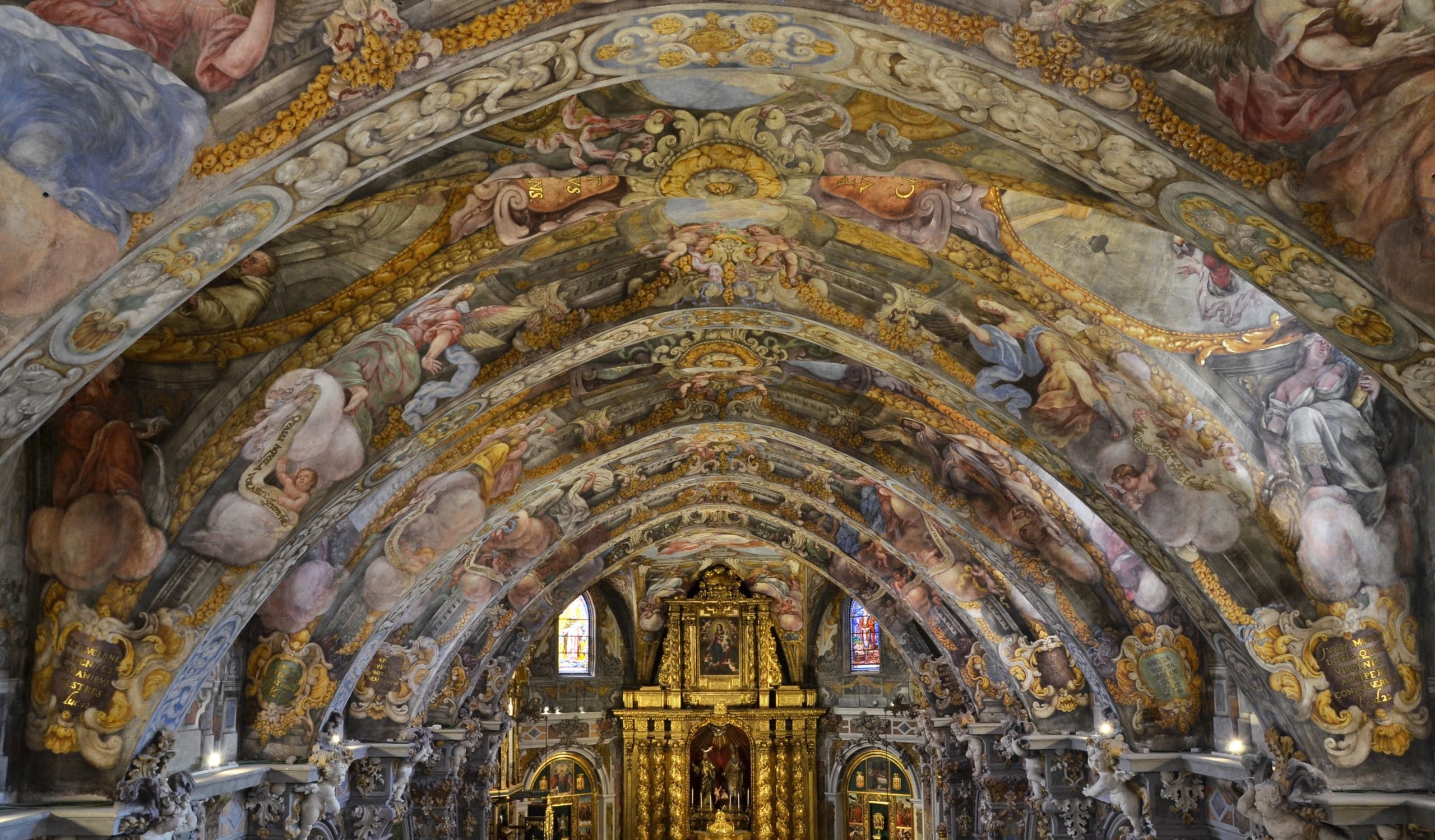 The architectural, ornamental and pictorial intervention performed in San Nicolás de Bari y San Pedro Mártir Church of Valencia, carried out by the Universitat Politècnica de València and the Archbishopric of the city, in collaboration with the Hortensia Herrero Foundation, has been, because of both the magnitude of the work and the techniques employed, the most important to date at the international level. The restored pictorial surface —1.904 square meters— is even larger than that of the Sistine Chapel —800 square meters. Along with the paintings of the nave, the chapels, the façades and the stained glass windows of the Temple have been also restored, and the protective covers of the building and the paintings have been rebuilt.

The result of the intervention carried out in the temple of the Caballeros street has been presented in a press conference this morning. The works have been coordinated by the architect Carlos Campos; the pictorial restoration has been carried out by the Instituto de Restauración del Patrimonio of the Universitat Politècnica de València, under the direction of professor Pilar Roig.

For the execution of the project, the team from the Instituto de Restauración del Patrimonio of the Universitat Politècnica de València first conducted four months of previous studies, and, subsequently, two years for the pictorial, sculptural and ornamental intervention of the vault, the pilasters and the walls of the central nave. 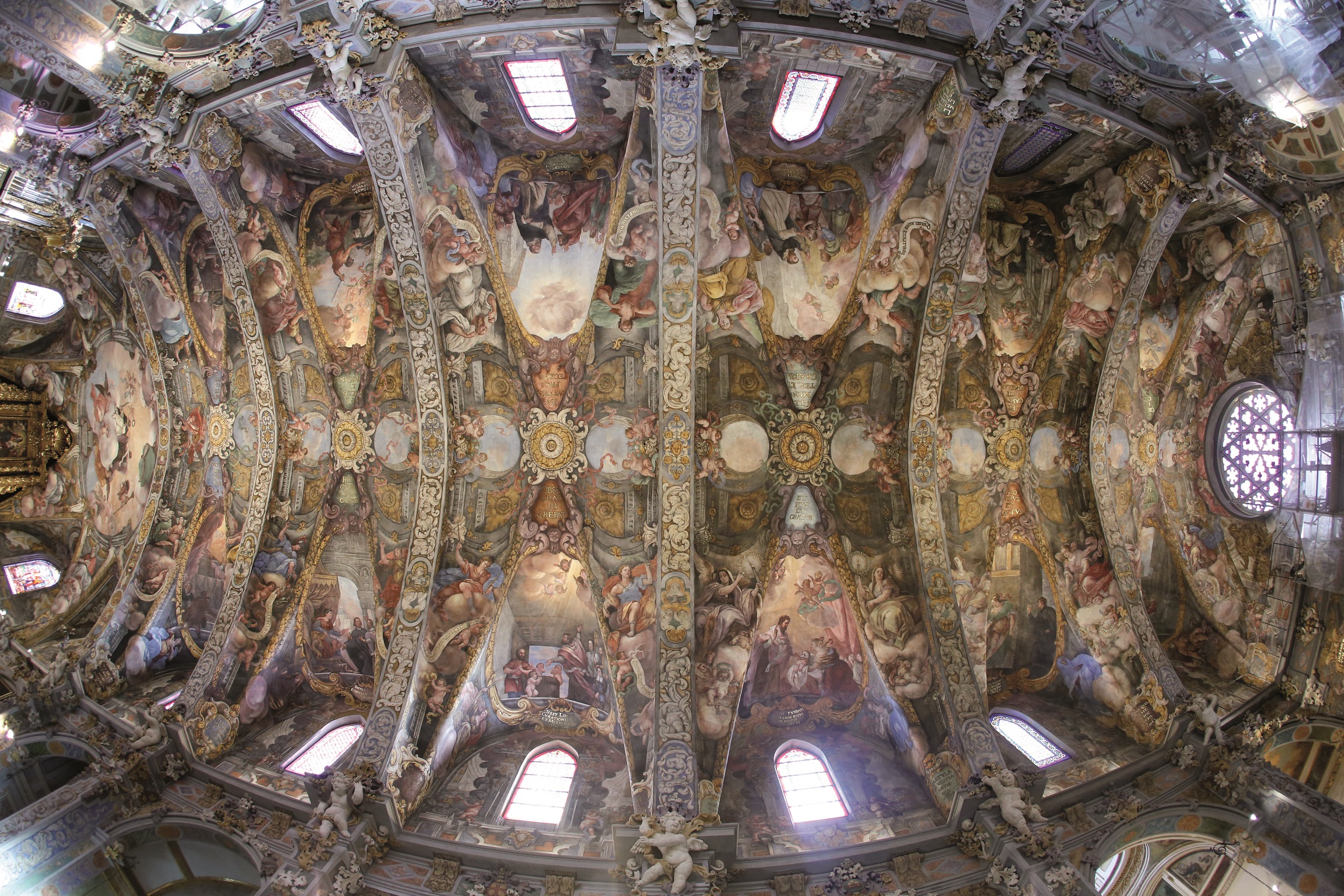 Their work has brought to light the original works by Dionís Vidal, frescoes of great technical quality and chromatic beauty, and unknown aspects of this set, as in the case of the mural painting above the lintel of the west door, which was completely covered under a layer of lime and has now been recovered. The sculptural work of Pérez Castiel has also been recovered —angels, rockery and volumetric decorative elements.

For the recovery of the frescoes, the team of the Universitat Politècnica de València used the latest technological advances in the restoration field, such as laser beams for the recovery of the areas that are more resistant to cleaning; ultraviolet and infrared rays, which have allowed to track the presence of repaintings, and microemulsions and chelating gels.

Biocleaning treatments consisting in the application, during 4 hours, of a bacterial solution on Japanese paper and a temperature of 25 degrees were also applied, which ensured the proper metabolic activity of bacteria in the areas where gelatine glues had been detected.

It should also be noted that, throughout the restoration process, the researchers of the UPV applied techniques for preventive conservation and maintenance of the frescoes, through the use of sensors to monitor the temperature and humidity inside the temple. After the intervention, these sensors have been installed in the parish in order to contribute to that preventive maintenance.

In total, the team of the UPV has invested more than 41,400 hours of work and, if we focus on the materials, the restorers of the Universitat Politècnica de València have used, among other things, 6,000 sheets of paper for mounting the paintings, 10,000 litres of distilled water, 100 kilos of cotton and 500 brushes.

An exhaustive architectural intervention has also been conducted, whose objective is to endow the temple with watertightness and thermal control conditions that allow an ideal interior conservation, as well as to restore the structural damage of the vault. The windows of the nave have also been restored, providing them with an electric drive that improves the ventilation of the church and the conservation of the frescoes, and the previous lightning has been replaced by a system of led lamps that does not produce a distortion of the colours of the paintings.

The recovery of the baroque decoration of the side arches of the temple is also worth noting, which has conferred a sense of visual continuity to the interior of the temple.

This intervention has been advised by Gianluigi Colalucci, restorer of Michelangelo’s frescoes in the Sistine Chapel and honorary doctor by the UPV. On a recent visit to the Valencian temple last October, Colalucci highlighted the excellent “work that has been carried out. Before the restoration, it was practically impossible to see anything; the work done until today has uncovered an exquisite chromatic richness. I am convinced that this church is going to receive a lot more visits after this project”.