The Communion Chapel has recovered its splendour 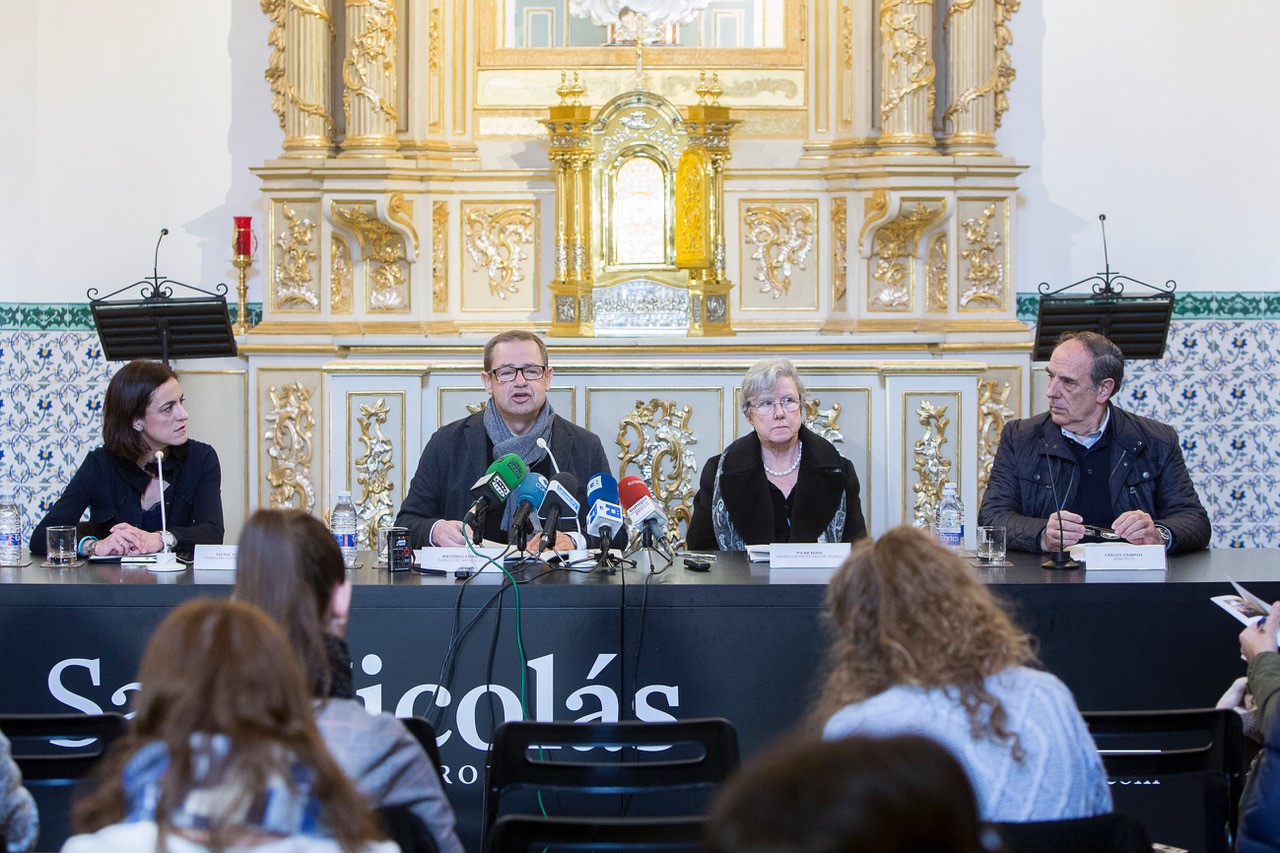 San Nicolás Communion Chapel has recovered its splendour after nine months of restoration works. The paintings, gildings, stuccos, etc. of the chapel as well as four canvases of small and large format located inside have recovered their former glory thanks to the structural, architectural and pictorial-ornamental restoration.

The global restoration project of the Communion Chapel, directed by the architect and professor of the UPV Carlos Campos, was made possible thanks to the combined work of the Universitat Politècnica de València (in particular, the Instituto de Restauración del Patrimonio) and San Nicolás Parish, with the collaboration of the Hortensia Herrero Foundation.

The renovated Chapel was presented this morning at a press conference with Antonio Corbí, the parish priest of San Nicolás; Pilar López, professor at the Instituto de Restauración del Patrimonio of the Universitat Politècnica de València; Carlos Campos, architect coordinator of the works; and Elena Tejedor, director of the Hortensia Herrero Foundation.

Antonio Corbí thanked “the Hortensia Herrero Foundation for promoting all this work and all the people who have worked during these months to make this restoration real. The result is beautiful and puts this Church on the map more clearly.” Corbí recalled that the parish “welcomed more than 300,000 people in 2017”.

Pilar Roig said that “a total of 25 professionals have worked on this restoration, together with a team of five people who have worked in the IRP of the UPV to restore four canvases. These works have been led by Professor Vicente Guerola and we have made a very important discovery for Valencian art. We have managed to clearly determine the authorship of one of the paintings of the chapel, the Glorification of Santa Lucía. It is attributed to the Valencian painter Luis Antonio Planes.”

Carlos Campos, responsible for the architectural part, indicated that the restoration consisted of “the repair of roofs and their supporting structure, the refurbishment of the space between the roof of the parish and the domes of the chapel, and the renovation of pavements and walls. In addition, we managed to solve humidity issues, a problem with which we had to deal from the start in this Church. This Chapel stands out due to the superposition of constructive systems and styles, which is the main characteristic that makes it different from the others, since throughout the centuries it underwent different interventions that have endowed it with a spectacular uniqueness”.

The director of the Hortensia Herrero Foundation, Elena Tejedor, wanted to highlight “how important this Church is for us. It was our first project and we have been working on it in several phases for six years, growing together with the parish itself. I want to emphasise these architectural actions, beyond the pictorial finish which is striking and visible. The reinforcement work is not really visible but it is fundamental, and thanks to these works we have discovered the origin of the building. We are proud of the work that has been done and the influence over tourism that the temple is exercising.