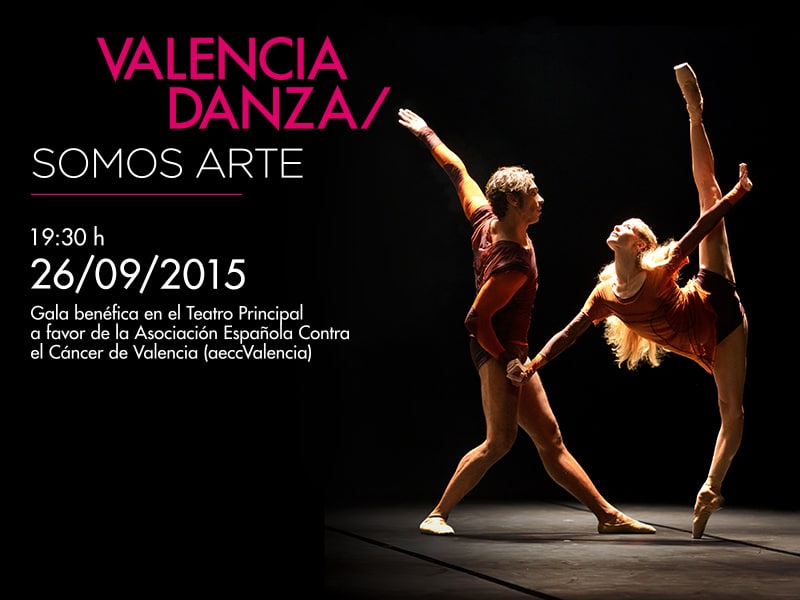 The ADAM dance association and the Hortensia Herrero Foundation launch the second edition of the dance charity gala called ‘Somos Arte’ (‘We Are Art’), with the aim of bringing internationally recognised dance stars and great artists from the Valencian Community who work in different companies outside of Spain to the Valencian public. In this case, all proceeds will go to the Spanish Association Against Cancer in Valencia.

The gala will take place on 26 September in Teatro Principal of Valencia, where different extracts of classical, neoclassical and contemporary dance pieces will be performed. Prestigious choreographers including John Cranko, Itzik Galili and Juanjo Arqués, apart from one of the most distinguished Valencian dancers, Nacho Duato, have given up the rights of their pieces to have them performed in this exceptional choreographic gala.

Performers will include, one more year, leading figures, members of the best dance companies worldwide such as the Stuttgart Ballet, The Royal Ballet, Het National Ballet and the Spanish National Dance Company. Alicia Amatriain, principal dancer of the Stuttgart Ballet, as the top of the bill, will be accompanied by amazing dancers such as Jason Reilly, Tamako Akiyama, Dimo Kirilov, Marijn Rademaker, Filipa de Castro, Carlos Pinillos, Itziar Mendizabal, Nehemiah Kish, José Carlos Blanco and the Valencian dancer Elisa Badenes.

The programme of the gala contains extracts of classical pieces including Diana and Actaeon (M. Petipa), Onegin (J. Cranko), neo-classical pieces as Mono Lisa (Itzik Galili), Limelight (Katarzyna Kozielska), as well as extracts from contemporary pieces such as Roulette (Juanjo Arqués), and Rassemblement by Nacho Duato.

ADAM would like to thank the Provincial Council of Valencia for offering the Teatro Principal, which allows the ‘Somos Arte’ gala to be held in a spectacular and incomparable place.

All proceeds from the ticket office will go to the Spanish Association Against Cancer in Valencia. The artistic direction of the gala is assured by the Valencian former dancer and dance teacher Gema Casino Penalba.

Tickets can be purchased from today via the usual channels at Teatro Principal and the platform www.entradas.com. Proceeds will go to the Spanish Association Against Cancer in Valencia.