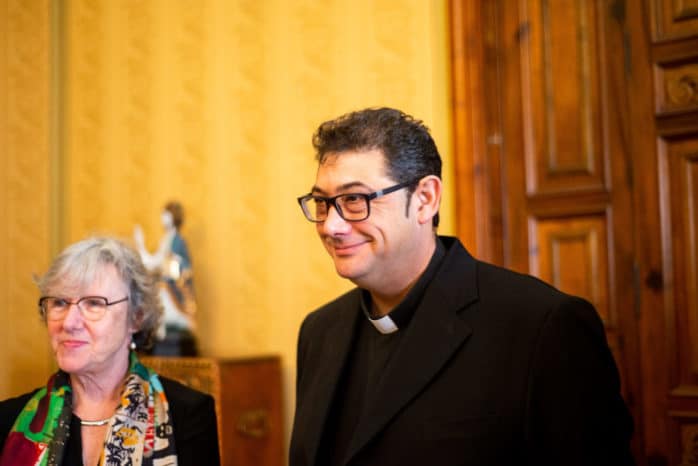 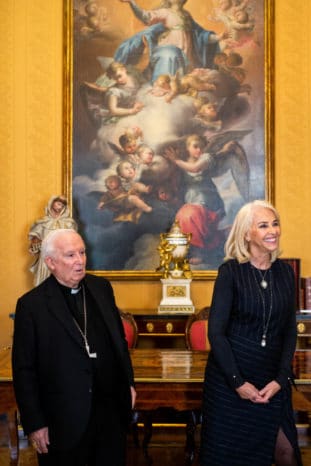 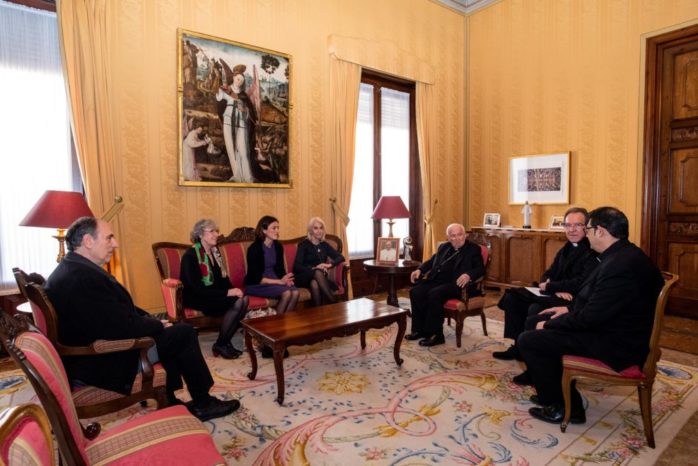 The Archbishopric of Valencia and the Hortensia Herrero Foundation signed an agreement to undertake the restoration and refurbishment of Santos Juanes Church, which was declared as a National Artistic Historical Monument by Decree of 02/21/1947.

The restoration will be developed in two stages. First, the restoration of fresco paintings of the temple vault, the work by Antonio Palomino, will be carried out by the team led by Professor Pilar Roig, professor of the Department of Conservation and Restoration of Cultural Property, and researcher of the Instituto Universitario de Restauración del Patrimonio of the UPV.

Second, the architectural intervention aims to correct the structural and building defects to ensure the conservation of the building, including its façades. This part will be directed by architect Carlos Campos.

The budget for the works amounts to six million euros and will be taken on by the Hortensia Herrero Foundation. It is foreseen that the essential preliminary works for the later execution of the works will begin shortly, both the graphical surveys of plans and the study of the pathologies that affect its architecture and its valuable interior. The actual intervention will start in the last quarter of the year 2020 and will conclude in 2024.

According to Cardinal Cañizares, “thanks to Ms. Hortensia and her team, the architect and restorer Pilar Roig” it becomes possible to restore another of the most emblematic churches in Valencia, Santos Juanes Church, a central and much visited place. “Thus, the restoration of this church will serve as “an invitation to all the faithful to enter it and contemplate its beauty”, the Archbishop said. The Cardinal praised the generosity of the Foundation “for the gesture of recovering works of art that are so beautiful and important in our history and for Valencia.”

On the other hand, Hortensia Herrero thanked the Archbishop for his “affectionate words”  and expressed that for her “it is an honour to undertake this magnificent work”. In addition, “after having already done one – referring to the restoration of San Nicolás Church – I have an idea of how it will look when finished, making this project even more satisfying”, she said. “The restoration of Santos Juanes Church is an old wish I have had ever since we started working at the Hortensia Herrero Foundation. It is a beautiful building of historical importance and for me it is a pleasure to do this in Valencia, a city with an important worship tradition, so to be able to contribute to the Valencian parishioners enjoying this renewed Church is a real honour for us”, Hortensia Herrero explained.

“We also have project managers, such as Carlos Campos and Pilar Roig, who have already worked together in the restoration of San Nicolás Church, with a spectacular result, as everyone can see. It will be an honour to work with them again”, Hortensia Herrero said.

“Although some partial restorations have been carried out over the last thirty years, there has not been a project that undertook a global restoration of such an important building from an historical, artistic and urban point of view. The magnificent paintings that Palomino designed constitute a valuable element of the church and so is the unique architectural evolution, including the medieval Gothic, Renaissance and Baroque periods”, the architect, Carlos Campos, explained.

Pilar Roig said that participating in this project “is of great satisfaction to me, both personally and professionally. This restoration is the finishing touch to the work begun in the 1960s by the restorer and profesor Mr. Luis Roig d’Alós, who completed his dedication to this heritage with the restoration of the mural paintings of José Vergara in the Communion Chapel of Saints Johns Royal Parish. Finally, ten years later, we will be able to successfully complete the comprehensive restoration of this wonderful pictorial, sculptural and ornamental set and return its splendour to this jewel of Valencian Baroque. Valencians and all art lovers are pleased and excited.”