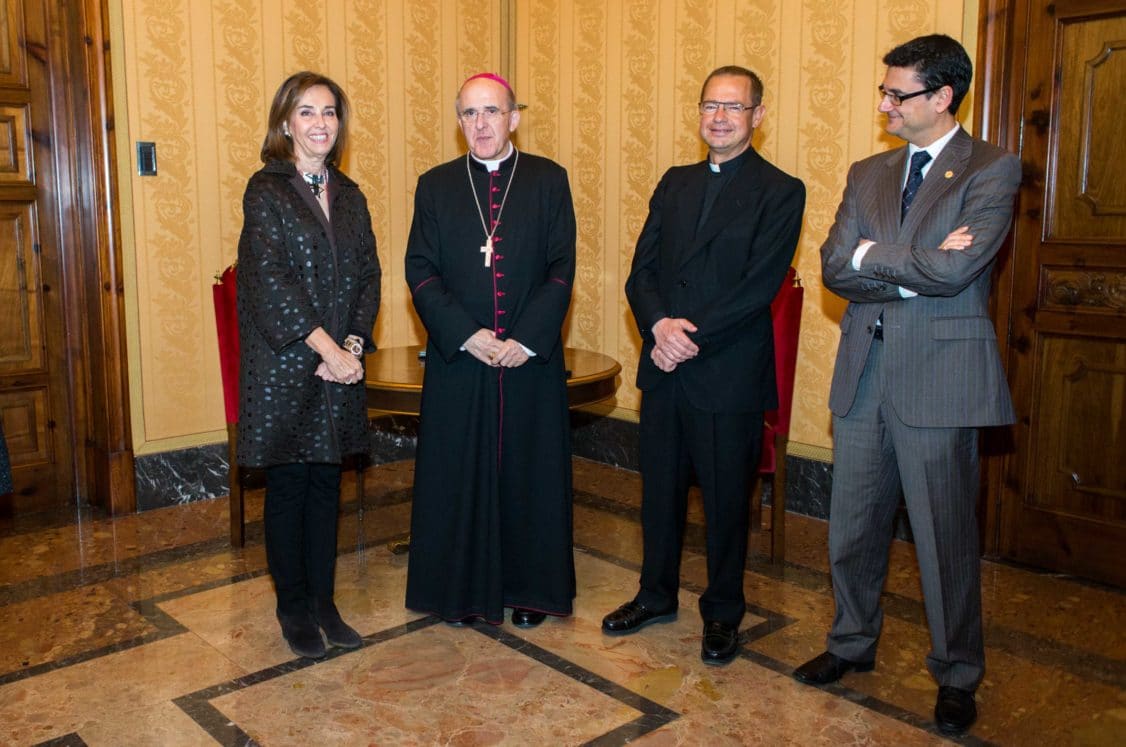 The Archbishopric of Valencia and the Hortensia Herrero Foundation have signed an agreement to undertake the restoration of the mural paintings and sculptures of the central nave of San Pedro Mártir and San Nicolás Obispo Church. The Universitat Politècnica de València will perform the works, involving the conservation of one of the assets of major artistic and cultural interest of the Valencian Community. The restoration will be carried out by a team of experts from the Department of Conservation and Restoration of Cultural Assets, led by Professor Pilar Roig. The restoration works began months ago with a previous study analysing the state of conservation of the frescoes and the rest of the ornamentation of the nave of the church. The resulting document written by the experts talked about a ‘worrying deterioration as a whole’. In particular, ‘the paintings, dating from the end of the 17th century, suffered a generalised darkening of the surface, had part of its polychrome altered, whitish areas and irregular spots’.

To confirm this diagnosis, the team of restorers also carried out a series of cleaning tests. These tests enabled us to evaluate the technical possibilities of the cleaning and the removal of sediment (dust, soot, and salts, mainly). ‘The findings suggest that the work will be complex, gradual and selective’, the report said. There are a total of more than 1,900 m2 of pictorial surface distributed in arches, lunettes, pilasters, vault and atrium, which have all kinds of problems: bulging, loss of cohesion, missing parts, overpainting…

Considering all that, the study proposes a restoration focused on four processes: the consolidation of the support and the pictorial layer (sealing cracks, micro-anchoring, application of binding materials…); the cleaning (removal of dust, adhered materials, insoluble salts…); the treatment of gaps and the aesthetic reconstruction (volume reconstruction in sculptures and angel statues, reconstruction of gaps in paintings and stuccos…), and the support works (monitoring and control of the restoration).

Almost 30 people from the University Institute of Heritage Restoration of the UPV make up the interdisciplinary team that will participate in this project, with a budget of around a million euros. The works will start in January and they are expected to last for approximately 20 months.

Together with the pictorial restoration process, the architectural strengthening of the temple will be focused on roofs, structure and some parts of the outside surface of the church. These works, designed by architect Carlos Campos, will be carried out by the company EMR (Estudio Métodos de la Restauración).

Both processes represent the second phase of a general restoration project started in 2012, when the neo-Gothic façades and that of the Chapel of the Communion (in Baroque style), as well as the stained glass windows of the temple, were restored.

One of the icons of the city

San Pedro Mártir and San Nicolás Obispo Parish Church, located in Calle Caballeros in Valencia, is one of the most iconic temples of the city. It presents a 15th-century Gothic structure with 17th-century Baroque decoration. The building, which was built over an old Muslim mosque, was declared a National Historic and Artistic Monument in the year 1981.

San Nicolás Church has gone through to a number of restoration works throughout its history. At least two projects are documented: the frescoes were repainted in 1867 (it has not been possible to determine whether it was a total or partial repainting) and José Renau made some work on the paintings in 1917.

The Hortensia Herrero Foundation launched two other important restoration projects in the city of Valencia last year: the restoration of San Pedro Mártir and San Nicolás Obispo Church and Santa Lucía Chapel. Also, the restoration of the statue of Our Lady of the Forsaken and its Shrine in the Basilica was announced a few months ago.