“I have long wanted to organise an immersive exhibition in Valencia. And now, it is finally here. It is highly gratifying for me to be able to bring this audiovisual installation here and to be able to invest in my city, in my homeland. I am proud to be able to bring art to Valencia, to make it available to all Valencians and, thus, contribute to achieving one of the objectives of the Hortensia Herrero Foundation, which I chair: to turn the Valencian Community into a cultural standard bearer. And even more so in this year in which Valencia is the World Design Capital”, explained Hortensia Herrero, director and patron of the foundation that bears her name and promoter of this initiative.

“When I discovered the curtain created by the designer and architect Ron Arad, I knew that Valencians had to see it. I would like the visitors who come to discover RON ARAD 720˚ to enjoy an artistic experience for all five senses and for people who are not used to going to museums to begin to look at art from another perspective, another point of view, perhaps one that is more fun, to get inside the work, to interact with it”, said Hortensia Herrero during the presentation, which was attended last night by more than two hundred people.

The piece designed by Ron Arad is in the form of a circular eight-metre-high curtain. Made up of 5,600 silicon rods suspended from a 18-metre diameter ring, it allows images to be projected and viewed from both inside and outside the ring. The result is a 360-degree multi-sensory and immersive experience where the audience both creates and observes the artwork. 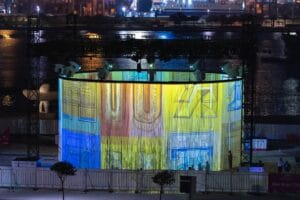 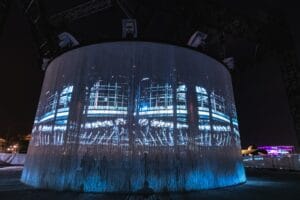 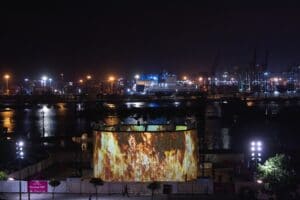 The Hortensia Herrero Foundation has brought four exhibitions to the city of Valencia in the last five years. This latest sees a change in format as well as location. Hortensia Herrero explained the thinking behind this decision: “In terms of the setting, it could only have been La Marina, which has become a hub that attracts entrepreneurship and innovation and is the very image of 21st century Valencia. In addition to being an area popular with tourists, it is also very familiar to the Hortensia Herrero Foundation as the EDEM Business School moved here in 2015 and we installed the sculpture “The Pamela Hat” here in 2018, which will now share its home with Ron Arad’s curtain for 3 months”.

Each of the participating artists uses Arad’s space differently. The video projections Transformer and Sordid Earth are the contributions from the British artist Mat Collishaw, one of which was inspired by the fallas in Valencia and which he created specifically for the exhibition. Colours Are Always Beautiful is the name of the piece by Javier Mariscal. In the projection, typographic shapes are followed by animated characters, such as Cobi the mascot for the Barcelona 1992 Olympics, who dance to the rhythm of Niño Josele’s flamenco guitar. The Greenaway & Greenaway brothers have devised a film that fractures images and projects them anew onto the huge curtain.

The inauguration was attended by the Valencian designer Javier Mariscal, representing the participating artists, to whom Hortensia Herrero dedicated a few words of appreciation. “I wish to thank the artists. Ron Arad, one of the most important designers in the world; Javier Mariscal, one of the most internationally renowned Valencian artists; Mat Collishaw, who has designed a piece especially for this exhibition, which takes the viewer on a journey through the fallas in Valencia, our beloved festival. Mat is a good friend who is also working on a very special project for the future Herrero Art Centre; and to the Greenaway brothers, for their stunning film”.

Ron Arad 720º is part of the official programme of World Design Capital Valencia 2022. Access to the immersive exhibition is free. The projection schedule will be from 22:00 to 01:00 from Monday to Sunday.