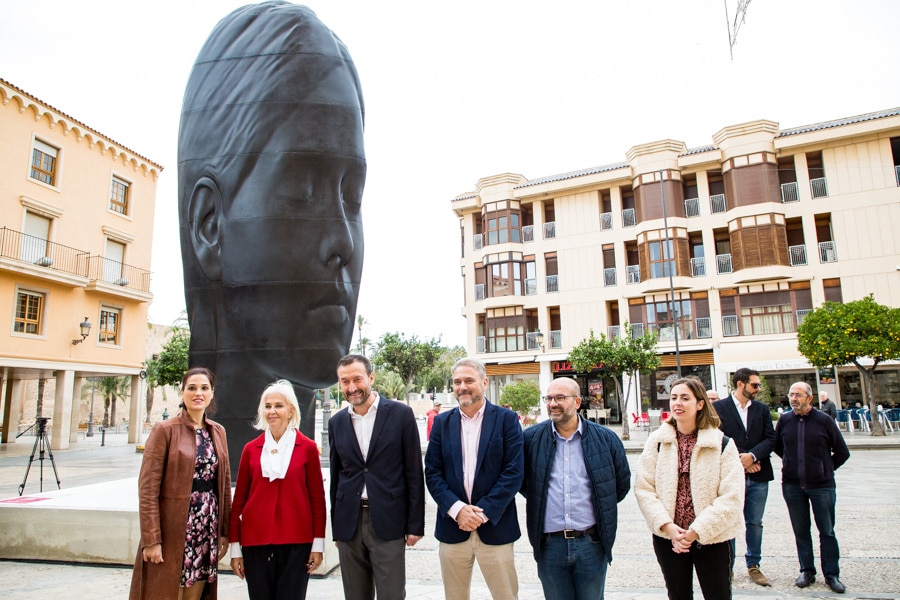 The sculptures ‘Silvia’ and ‘Maria’, by artist Jaume Plensa, can now be admired at Plaça del Congrés Eucarístic square in Elche. Both pieces have been exhibited at the City of Arts and Sciences (Valencia) for almost 5 months for an exhibition promoted and organized by the Hortensia Herrero Foundation, and the president of this entity has chosen them to permanently stay within the Valencian Community. They will travel during the next two years on an itinerary that started this morning.

The temporary exhibition will be in Elche for the next eight months. The presentation was attended by the president of the Foundation promoting the exhibition, Hortensia Herrero, and the mayor of Elche, Carlos González. “I am delighted and very proud to have been able to bring these two works of art by Jaume Plensa to the heart of this city. I want to thank all of Elche and especially its mayor, Carlos González, for the goodwill shown to host these two sculptures” said Hortensia Herrero.

The president of the foundation that made this temporary exhibition possible explained how the idea came about: “After the temporary sculpture exhibition we did at the City of Arts and Sciences in Valencia we selected two pieces, Silvia and Maria. Our intention was to buy them in order to exhibit them and make them known to more citizens of the Valencian Community so that more people can enjoy art. “In addition, Herrero specified that “the piece ‘Maria’ was bought by the Hortensia Herrero Foundation and ‘Silvia’ was purchased by Mercadona, for which I thank Juan Roig”

Hortensia Herrero also referred to the “tourist appeal of these two works of art. Hopefully they will become a new tourist attraction for this city, together with the wonderful Misteri d’Elx (Mistery Play of Elche).”

Carlos González, the Mayor of Elche and host of the event, wanted to thank “Hortensia Herrero and her Foundation for their generosity. We are honoured that Elche is the first city in which the tour of the Valencian Community begins to disseminate the work of Jaume Plensa, one of the Spanish artists with greater international projection,” Carlos González said. He also added that “we are really delighted that Elche is hosting ‘Silvia’ and ‘Maria’, two sculptures of monumental scale, on Plaça del Congrés Eucarístic square, between the Basilica of Santa Maria, the Calahorra medieval tower and the Altamira Palace, and that they may become two new cultural icons for our city, perhaps our contemporary ‘ladies’ of Elche.”

“The monumental sculpture interacts a lot with the environment, establishing a dialogue with the architecture, and we can see here how ‘Silvia’ and ‘Maria’ take a very different role than when they were in the City of Arts. Here, in Plaça del Congrés Eucarístic square, the sculptures come to life,” Javier Molins, the curator of the Plensa exhibition in Valencia, explained. He also pointed out that “Elche is joining other cities that host Plensa’s work such as Chicago, New York, London and Seoul.”

Jaume Plensa is one of the Spanish artists with greater international projection, as cities such as Montreal, San Diego, Chicago, Seoul, Tokyo, Miami, New York, London, Salzburg, Liverpool, Dubai or Dallas have his sculptures permanently installed. Likewise, Plensa’s work has been the subject of temporary exhibitions in museums and institutions such as the Venice Biennale, the Nasher Sculpture Center in Dallas, the Yorkshire Sculpture Park, the Picasso Museum in Antibes, the MAMAC in Nice, or museums in cities such as Helsinki, Tampa or Nashville and galleries in Paris, New York and Chicago. Plensa has opened an exhibition this year at the  Museo Reina Sofía in Madrid and at the  MACBA in Barcelona.

Plensa has received numerous international awards such as the Medal of the Knight of Arts and Letters of France, the Premio Velázquez de las Artes and has been invested Doctor Honoris Causa by the Art Institute of Chicago and the Universitat Autònoma de Barcelona.